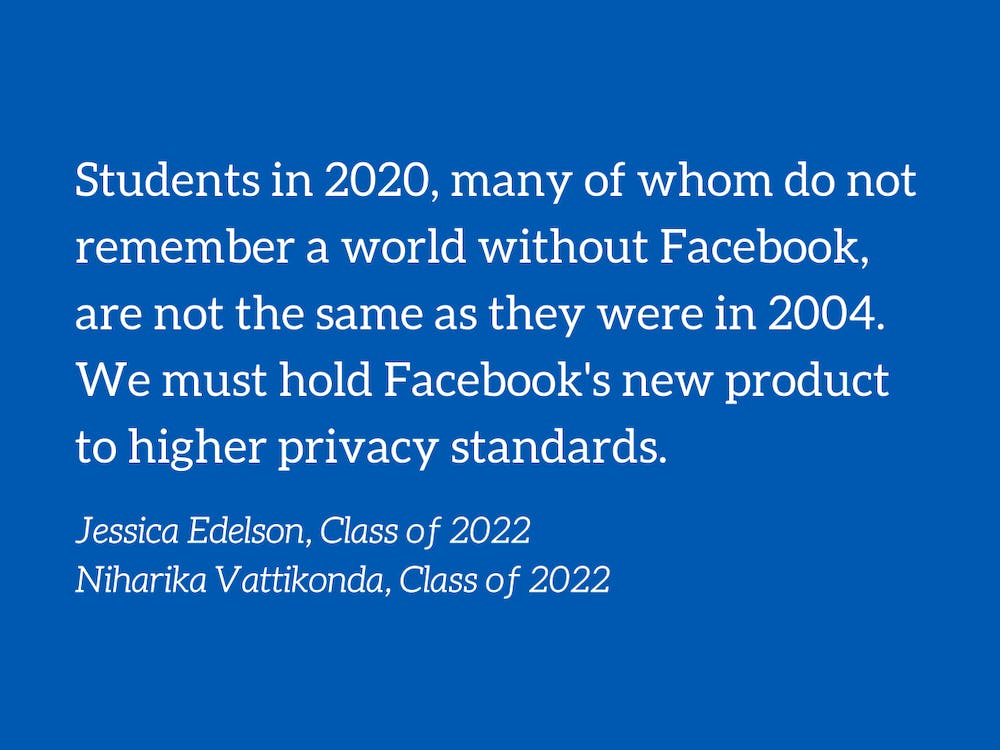 Picture this: You, a college student living off of ramen noodles and sleepless nights, waltz into the common room and flip open your laptop. Bored and procrastinating on your problem set, you sign up with your “@duke.edu” email address for a profile on a brand new college-only site: Facebook.

You probably just imagined yourself as a Duke ‘04 student, rocking fuzzy slippers and clutching a white iPod Shuffle. Or perhaps you pictured Justin Timberlake snooping on a computer and discovering a nascent version of the social media platform.

Yet, we’re here to bear the news that, like tie-dye sweat suits during the pandemic, everything old is new again. Here, in 2020, you very well may find yourself going to sign up for Facebook’s new product… Facebook Campus.

When thefacebook.com launched at Duke in February of 2004 (the platform would later drop “the” from its url), then-Harvard sophomore and thefacebook public relations officer Chris Hughes stated that Duke was the fastest-growing campus network they had seen.

The Chronicle reported that a Duke sophomore said that thefacebook was going to be most helpful for arranging study groups (if he only knew…).

Another student was so shocked that he spent a whopping 20 minutes in one day scrolling through the site (if HE only knew…).

The quick adoption of the platform by the students of ‘04 was noted to have emerged from Duke’s general “preoccupation with social networking” that set it apart from other institutions.

And though the Duke 2020 student experience certainly looks far different than it did 16 years ago, we still possess our penchant for networking. No wonder Facebook announced that Duke is going to be one of the first university partners of Campus! If we were Facebook trying to promote a repackaged version of our earliest product, we too would want to return to the campus that originally yielded the most impressive growth.

But while Facebook is trying to sell the 2004 experience to us again, we must question—why?

In the original Harvard Crimson and Duke Chronicle articles announcing thefacebook.com to college students, one word that frequently appears is striking. That word is privacy. Mark Zuckerberg emphasized that his new site, touted as a more secure alternative to Friendster, included “pretty intensive privacy options.”

During the days when Zuckerberg claimed not to have any intention of generating revenue (ha!), the privacy options were front and center. He admitted that these options were a way for his own image to recover after the disaster that was facemash.com. But there was also a sincere desire to create secure spaces to improve the college networking experience. The original Facebook was, after all, made by students, for students.

Get The Chronicle straight to your inbox

Signup for our editorially curated, weekly newsletter. Cancel at any time.

Now, years later, the focus on privacy that once existed amongst a bunch of ‘04 college students does not align with the modern identity that Facebook has cultivated. In fact, Chris Hughes, the aforementioned PR rep who spoke to The Chronicle, came forward with a stance against Facebook and its “sloppy privacy practices.”

We can forgive the Zuckerberg-who-still-lived-in-a-dorm for being over-enthusiastic about the prospects of digital privacy. But we shouldn’t be as forgiving to the 2020 Zuckerberg and friends, now full-fledged adults with over a dozen years of experience.

The Facebook of today is no longer fueled by thefacebook’s peer-to-peer scrappiness. Rather, it is a multibillion dollar business that, like most sites these days, relies on data as a form of currency. But Facebook has not always been responsible with its users’ data. Various misuses and poorly thought-out product developments have been extensively documented through the social media behemoth’s evolution.

What this “activity” actually includes is tucked away in the Data Policy. Facebook Campus accounts compile your school email address, the date when you sign up for the account, the frequency in which you scroll through your feed, and even the battery level of your phone. Whether Facebook is front-and-center or running in the background on your laptop, the GPS locations you hand over, your IP address, and your interactions with a far-reaching web of Partner websites are also being collected and stored.

The Facebook Campus directory also invites you to share your “major, classes, graduation year and more” so that your classmates (and Facebook itself) will be able to see the information that’s usually behind the 2-factor authentication tied to your DukeHub account. Classmates, and possibly Duke administrators, will also be able to determine more private information based on your Campus activity, like which dorm you live in or the party you attended last Friday night.

It is not too far a step to think that the new Campus sites will help Facebook further microtargeting abilities. Facebook allows businesses to define core audiences based on location, demographics, interests, behavior, and connections. If companies were previously approximating college students by age, location, and interests, this new development will let advertisers cut through all the noise and get directly into the news feeds (and minds) of students.

It is also not too far a step to grow worried about Campus and its link to personal safety. The platform is a trove of information that outwardly encourages students to publish information that makes them vulnerable to stalking. We must not forget that the dynamics and interactions that occur within Duke’s online corner of Campus extend to our real-life spaces, too.

This blending of the digital and the physical campus is the main selling point of the Campus product. In pandemic times, as buildings and common rooms lock down, students are craving social interaction. Facebook is looking to emerge as a savior, connecting students facing the crippling isolation and restlessness that comes with quarantine.

Sure, some of the Campus features will be useful: groups, events, chats, campus directory. Yes, the Facebook user interface is far more intuitive than university-produced sites. But we must wonder: is Facebook trying to save us, or itself?

Maybe Facebook genuinely wants to improve the student experience. Or maybe, like a Duke student trying an early morning yoga class after a night out, Facebook is taking a new route to “find itself” after a problematic series of events for the company. Though we will never truly know the intention, Facebook is clearly trying to find refuge in the warm nostalgia of its earliest days.

But nostalgia often makes things seem better than they actually were. Facebook Campus is not thefacebook, even if they seem similar. And students in 2020, many of whom do not remember a world without Facebook, are not the same as they were in 2004. We must hold the new product to higher privacy standards.

When Facebook Campus launches here at Duke, we understand that you may rush to opt-in. But, before you begin posting and chatting up a storm, we urge you to take a moment and think: Hmmm. Better not.

Jessica Edelson and Niharika Vattikonda are Trinity juniors. Their column “on tech” runs on alternate Thursdays.