Michael Francis Kohls was sleeping in his bunk-room aboard the dive boat Conception last year when he was jolted awake by a noise — the sound of a chair sliding across the deck.

Kohls lay in bed for several minutes, not knowing what to make of the sound, when he suddenly heard a scream, he told investigators. After getting up, Kohls became the first crew member to discover that a fire had started aboard the ship as it was moored off the coast of Southern California, according to a trove of documents released Wednesday by the National Transportation Safety Board, which is investigating the disaster.

He alerted four other crew members, and several of them tried in vain to warn the dozens of passengers who were sleeping below deck, he told investigators. But it was too late.

The Sept. 2, 2019, fire would consume the dive boat, trapping and killing 33 passengers — many from the Bay Area and Santa Cruz — and one crew member who were asleep in the lower decks. It became the deadliest maritime disaster in California since the Civil War. 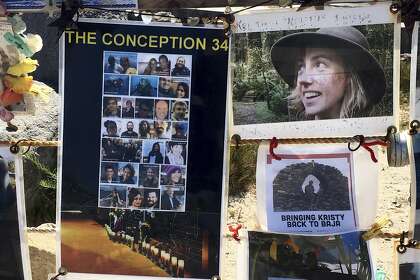 While the documents released Wednesday reveal new details about the disaster, the NTSB has not determined what caused the predawn blaze. The boat was run by Santa Barbara-based Truth Aquatics Inc., which led boat trips to destinations off the coast of Southern and Central California for decades.

Families of 32 of the victims and a surviving crew member have filed claims against the boat owners, Glen and Dana Fritzler, and the boat company. In turn, the Fritzlers and the company have filed a legal claim to shield them from damages under a maritime law that limits liability for vessel owners. Court filings show they have offered to settle lawsuits with dozens of victims’ relatives.

Nobody has been criminally charged in the disaster. The five-person NTSB will hold an Oct. 20 meeting to vote on the investigation’s findings, as well as the blaze’s probable cause and any potential recommendations.

The documents also support a fact revealed by the NTSB shortly after the disaster: All six Conception crew members were asleep when the fire started — a violation of maritime law. Kohls was the first to alert the other four crew members above deck, all of whom ended up surviving, about the blaze.

“If Mikey hadn’t woken us up … I don’t think we would have made it,” Cullen Molitor, the boat’s second captain, told investigators.

At 3:14 a.m., Capt. Jerry Boylan radioed for help from the ship’s wheelhouse using a “mayday” distress message to the Coast Guard, which ended with him saying he couldn’t breathe, before abandoning the ship.

Molitor told investigators he saw smoke quickly overwhelm the wheelhouse and Boylan jump into the water, a stream of smoke following him. Thinking Boylan was on fire, Molitor jumped in after him.

Boylan was OK, Molitor said, but looked back at the ship in disbelief as he treaded water.

“The only thing he was saying, as he was looking back toward the boat was, ‘It’s just all those people,’” Molitor said. “And, you know, you could just see the whole galley was fully engulfed. And he wasn’t sure if anyone had gotten out. None of us were at that point.”

The documents detail efforts by some crew members to save the 34 people below deck.

Milton French, a deckhand, said he frantically tried reaching those in the lower decks. One face in particular kept popping into his mind: that of Allie Kurtz — a deckhand whom French was dating, and the only crew member sleeping below deck with the passengers.

French said he knew there was scuba gear at the back of the boat that he could use to breathe during a rescue attempt.

“I mean, I think there’s f— 34 people down there the whole time that we were trying to get to, but then like specifically Allie popped in my head,” French said. “… I could keep breathing. For how long, I don’t know, but it was like a furnace. So I just kind of stood and looked, and like tried to work up the nerve to f— run into it.”

But Boylan, the captain, told French to get into a lifeboat.

“So I turned to him and asked him, like, ‘How do I get into the bunk-room? Just tell me how.’ I’m like pleading with him to tell me like the f— magical solution here because I wasn’t finding one,” French said. “And he just kept saying, ‘We can’t, we can’t.’”

“I’m like, no, that’s not the answer,” French said. “You’ve got to f— tell me how. And he just, ‘We got to get in the skiff; we got to get out of here.’ And I just looked around again, and was just like helpless.”

After being rescued, several crew members tried circling the boat in their skiff in an attempt to find survivors. Two crew members saw splashing in the water, which ended up being sea lions. No screams or banging were heard from those below deck, crew members told investigators.

Molitor concluded the written statement he provided to investigators with the result of that search: “No survivors were found.”

The Associated Press contributed to this story.